France, the country of l’amour! And the cultural center of Europe for centuries and continues to be the source of inspiration for artists, philosophers, designers, and the like to this day. French people also have a great sense of style, fashion, and appearance. Located in Western Europe, it has land boundaries with Belgium, Luxembourg, and Germany in the northeast, Switzerland, and Italy in the east, and Spain in the south. France’s distinguished individuality is an important cultural characteristic that is captured by the French passion for uniqueness and freedom of opinion, both in society and in business. Our CareerProfessor.works infographic below will prep you for every challenge a French working environment withholds. Click here for the legend of the infographic. 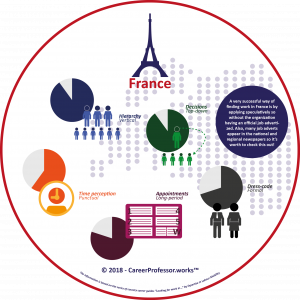 In France, both business and government life is in its core hierarchical structure. Positions and the corresponding power are clearly defined. Behaving formally will be highly appreciated by the French. You should dress formally and address another person in a formal matter, by using the formal ‘vous’, not the informal ‘tu’. Also, surnames and formal introductions are used.

France’s business culture is hierarchically structured and important decisions are rarely made in a meeting. Most input takes place before the meeting itself by the ‘patron’ or chief. During meetings, there is a tight schedule and a detailed agenda. Decision-making is often a lengthy process as everything is extensively analysed and all matters are usually discussed in detail. Keep in mind that agreements are done in writing since verbal agreements have no value.

For informal gatherings at someone’s home, like a birthday party, you should come 15 minutes later than the agreed time. However, be on time when meeting at a restaurant. The French take punctually very seriously. The office hours are from 8:30/9:00 a.m. till 6 p.m., Monday to Friday. French take a long lunch break between 12:30 and 2:30 p.m.

Appointments are usually scheduled two weeks in advance. The best time to make an appointment or plan a meeting is either at 11 a.m. or 3:30 p.m. It is important that you are on time for a meeting or else make a phone call explaining your delay.

Did you know that the work culture in France is very different from that in the Netherlands?