Spain has a rich cultural history and is known for its beautiful cities like Barcelona, Seville and Granada as well as its world famous artists’ i.e. Picasso, Goya and Dalí and is a popular tourist destination. Located in southern Europe, it has land boundaries with France, Andorra and Portugal. Spain is still the world’s largest producer of olive oil (a shocking fact for our Greek colleague!) and third biggest producer of wine. With its welcoming population, good climate and recovering economy, it is worth discovering! This CareerProfessor.works infographic will present some things you need to know about the Spanish working environment. Click here for a legend of the infographic. 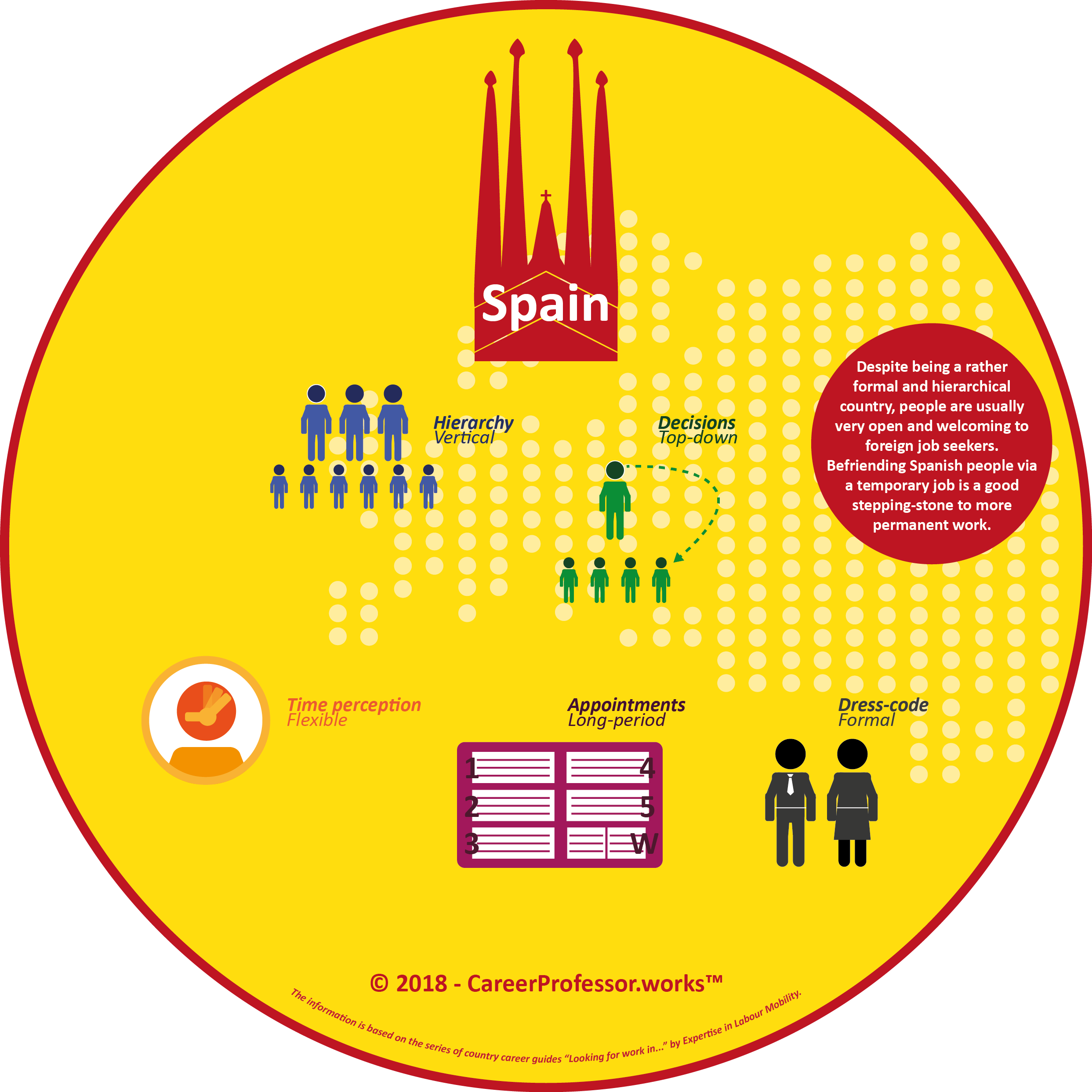 Hierarchy
In Spain most companies are still hierarchically structured, although the “old mind set” is changing at high speed  having its influence also at international job seekers who now have to realise that Spain is a fast changing country demanding an open and flexible workforce. Throughout the Spanish economy, individualism is predominant and team orientation is less important. Spain also goes through globalization-induced changes, but do not underestimate the going-strong of the traditional family businesses that are rather hierarchical with strictly separated divisions, and a strong bureaucracy.

Decision-Making
As the hierarchy is rather vertical, important decisions are usually made top-down. Decisions are not often made during a meeting but rather for giving instructions and exchanging ideas with subordinates. Although meetings are rather informal, it is important to keep in mind that these are your work colleagues and not your friends. It is considered very rude to interrupt one another, and disregarding hierarchical structures is best avoided.

Appointments
It is wise to schedule appointments in advance due to busy schedules. Do not plan a meeting between 12:00 and 1600: pm, people will be out for lunch. Either arrange an appointment before 11:30 am or after 16:00. When having a meeting, it is common to shake hands with your business partner, and it is not uncommon for women and men to kiss each other on both cheeks. When being interrupted at a meeting, do not feel offended, it usually means that someone is genuinely interested in the topic and wants a dialogue. Important to note is that your business colleagues need time to get to know you so do not jump into negotiations immediately or while having a lunch or dinner meeting. Spanish people prefer to do business with people they know and find trustworthy.

Dress Code
Being properly dressed is of vital importance for the Spaniards. They, themselves put time and effort in their appearance. In business settings, the dress code is classic, professional and conventional. Men wear dark suites however; lighter colours are also not avoided.  Women usually wear suits too either with skirts or trousers. Bare legs in summertime are allowed. Women may wear a bit more make-up then the women in northern countries but never in a flashy way.

*wherever the text reads she or her, we can also replace this by him or his.

Did you know that work culture in Spain is very different from that in India?

Important message for #students: why do you want to work for a particular organization?And think in advance about what you have to offer. More so, if you are an #internationalstudent think about what that experience has brought you in relevance to the job at stake?#employability #skills #careerprofessor #jobs #careeradvice #employerview #intled #highered #studyabroad ... See MoreSee Less

Future Career Impact is THE #1 reason for #internationalstudents to choose a #highereducation institution. But will they stay or will the go after #graduation and how do you prepare them for a #Job in their home country? CareerProfessor.works has the answer: #Global #careertips in over 40 countries in a gamified tool. ... See MoreSee Less