South Africa: the country of wildlife, Nelson Mandela, rugby, and a good old braai. With its rich cultural history, and eleven official languages it is probably one of the countries with the largest cultural diversity in the world. To know how to survive in this colourful melting pot, this CareerProfessor.works info graphic will help you to grow a fruitful working relationship in South Africa. Click here for a legend of the infographic. 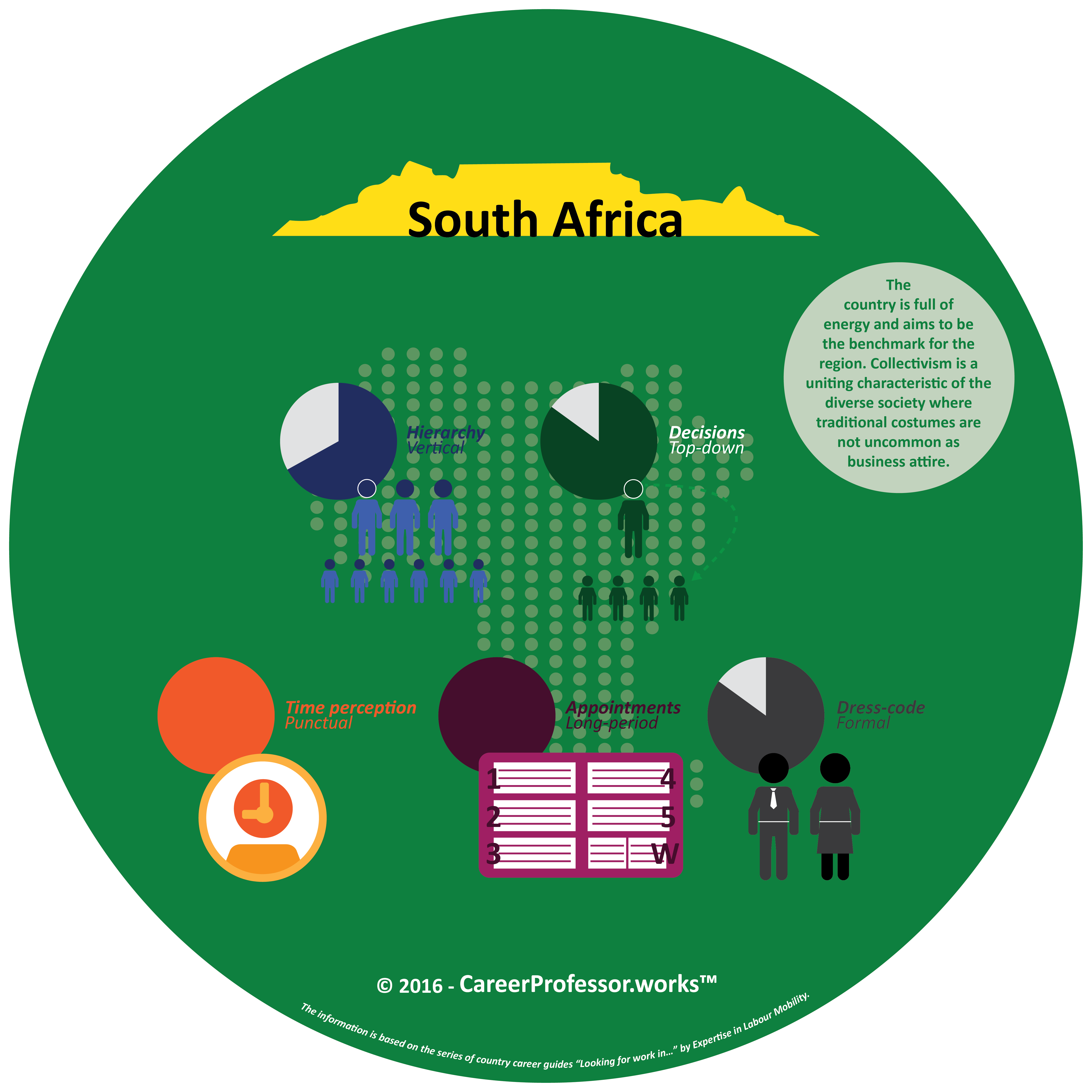 Hierarchy
Traditionally, the South-African business culture knows a vertical hierarchy. Large multinational companies play a dominant role in the South African economy. But as global management trends are changing, so is the hierarchical pyramid. In the past few years this pyramid has flattened, and will probably flatten further. As the period of Apartheid still influences society, groups within the society might still separate from each other, rather than merge.

Decision-Making
As the hierarchy is rather vertical, important decisions are usually made top-down. In meetings, it is common to warm up the conversation with small talk before the start of the negotiation. Although meetings are rather informal, it is important to keep in mind that these are your business partners and not your friends. It is considered very rude to interrupt one another, and disregarding the hierarchical standards is not recommended.

Time Perception
South Africans are usually very punctual, especially in business meetings. It is important to always be on time, preferably even 5-10 minutes early. Working days often start around 8/8.30, and last until 4.30/5.00 pm. It is clever to keep in mind that planning meetings on Fridays is sometimes difficult, because sometimes people like starting their weekends early.

Appointments
It is wise to schedule appointments early in advance. Especially when you plan to meet senior level managers, it is advisable to get the date locked in their agendas as early as possible. Cancelling appointments is ill advised and if you are running late, it is always appreciated to give them a call and apologise. It is important to stick to the promises that you have made.

Dress Code
In business settings, the dress code is considered to be more or less conservative.. Women often wear over the knee skirts or dresses, men often wear a business suit and a tie. It is not uncommon, certainly for official functions, to see African men and women in colourful traditional clothing.

Have you already read about the work culture in the UK?

Important message for #students: why do you want to work for a particular organization?And think in advance about what you have to offer. More so, if you are an #internationalstudent think about what that experience has brought you in relevance to the job at stake?#employability #skills #careerprofessor #jobs #careeradvice #employerview #intled #highered #studyabroad ... See MoreSee Less

Future Career Impact is THE #1 reason for #internationalstudents to choose a #highereducation institution. But will they stay or will the go after #graduation and how do you prepare them for a #job in their home country? CareerProfessor.works has the answer: #Global #careertips in over 40 countries in a gamified tool. ... See MoreSee Less